Murray Harry Scheshko, the gardener’s father and son of Isidore and Celia, was a highly intelligent, active, and energetic young man who came of age at the time of WWII. He was born on 5 June 1921 and can be found on a U.S. Marines muster roll on 11 January 1940. He was 18 years old.

He was a private, and the listing is alphabetical, so he is about #9 up from the bottom.

Also, on 11 January 1940, this is listed on Ancestry for Murray, but again, no record to go with it: NEW YORK NATIONAL GUARD SERVICE CARDS.

U.S. Veterans Affairs Death records show Murray as enlisting on 8 January 1941. But 8 February 1941, a month later and a little over a year after the Marines muster list, he is showing as enlisting in the U.S. Army, Airborne division. What happened between the Marines and the Army? Between 1940 and 1941? I don’t know. And I don’t have a document for this as this is text info on Ancestry.

I’ve never heard of this site before, but they have his army serial number listed (12025969) and mentioned he was Air Corps.  For those of you who don’t know, as I did not know, there was no U.S. Air Force before 1947. The air division was part of the U.S. Army.

Murray’s military history must have been extremely interesting. On the one hand, when I was dating the gardener, I was regaled by the gardener and by Murray with stories of how he spent most of his time in the brig for fighting. At one point, I knew how many days he spent, and it was astronomical. On the other hand, he must have spent some time not in the brig because when the gardener was little, his father had a bucketful of military medals, including a Purple Heart. The gardener has rueful recollections of playing with the medals (and possibly cutting up the ribbons) when he was a kid.

What I didn’t know until somewhat recently is that Murray was part of the 353rd Fighter Group that flew bombing missions over occupied Europe. They are considered heroes in England. Murray was not a pilot. He was staff sergeant, an “armourer,” which means that he was in charge of the weapons for the group. There are websites online devoted to the group, and Murray is mentioned in them.

I have also been given some photos of the group with Murray in them. 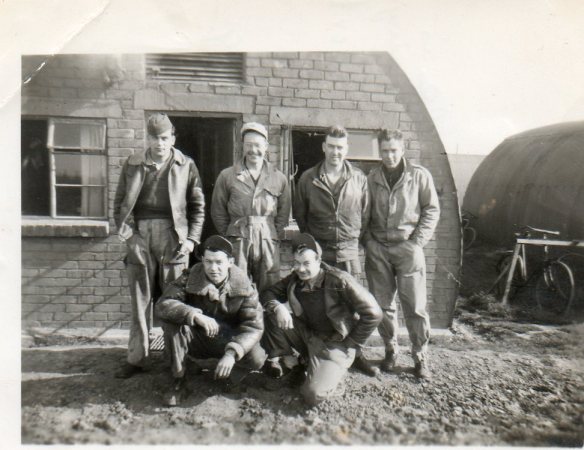 Murray is standing, on our left. 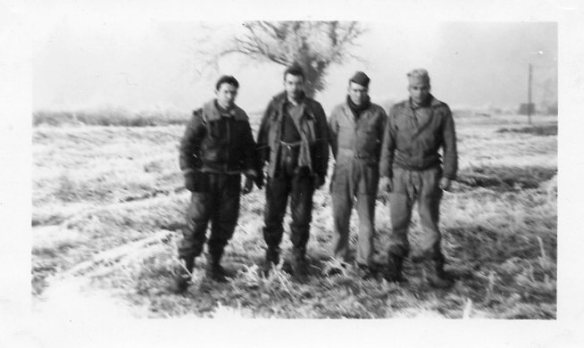 Murray on our right

Were the brig stories exaggerated? Or was he able to be a hero in between his fights? By way of explanation about the fighting, I will mention that during the time that Murray was stationed in England he experienced a great deal of anti-Semitism which tainted his time with the English.

I am posting a photocopy of a pic of Murray with other soldiers in the U.S. Army in case someone finds this blog post and recognizes someone in the photo.

Murray was a gentleman and a good father, but there were some vestiges of him as a “tough guy” throughout his life. He always dreamed of being an attorney (and loved his copy of Black’s Law Dictionary), but the opportunity didn’t happen for him. Instead, he became Plant Manager and VP of Research and Development for Dr. Denton (yes, the pjs with feet) and Lambknit sweater mill (southwestern Michigan).

After his American military career, instead of going to school or settling down, and before he became a business executive, Murray took one detour. To be continued at some point.